Victory for The Pirate Fleet 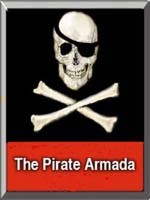 The Pirate Fleet staged its first raid today at the Firedoglake Leftie sweatshop, as they were busily calling and faxing Senators, trying to convince them that Feingold's censure motion has support. Not being progammed to respond to new ideas, the FDL androids tried to ignore comments from the Raiders.

Then "Reddhedd" finally banned Commodore Henry Jennings of Dumbshit of the Week:

I think the straw that broke the camel’s back and got me listed as a “GOP defeatist troll” was my prediction that the censure resolution would turn out to be just like a “cold fart on a hot griddle.” I guess that didn’t go over too well; when you’re all fired up because the Revolutions gonna be starting any minute (again), the last thing you want to hear is that you’re chasing your tail. 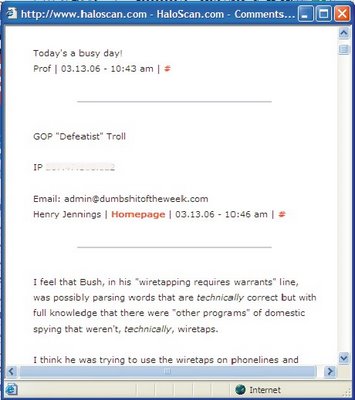