August 6: A Day to Celebrate

Sixty years ago today the Enola Gay delivered a message to Imperial Japan that could not be ignored. This is a day I commemorate for the courageous decision made by President Harry S. Truman: to break the will of a militaristic society whose war of aggression had already cost us too much blood and treasure.

On 6 August, 1945, my father stood on Okinawa, a nineteen year-old sergeant of Marines decorated with Bronze Star and Purple Heart, having lost too many friends and seen too many horrible things. He looked forward only to death in the invasion of mainland Japan and the subjugation of its fanatical population. Victory was inevitable; only the cost remained to be determined.

Enter the little haberdasher from Missouri whose bolt from the blue ended the titanic conflict. 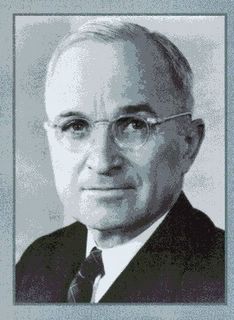