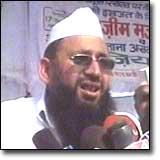 Political parties have criticised Uttar Pradesh Haj and Minority Welfare Minster Haji Yaqoob Quereshi after he announced a reward for the beheading of the Danish cartoonist who made caricatures of Prophet Mohammed.

While they are demanding action against Quereshi, government sources told NDTV that they are asking for legal advice on the issue.

Even Quereshi's fellow Muslims are criticizing his remarks:

Several prominent leaders from the Muslim community have already distanced themselves from the minister's remark.

These included members of the Muslim Personal Law Board and the Jamiat-Ulema-e-Hind, the largest political organisation of Muslims in the country.

"The minister has no right to take the law in his hands as it will lead to chaos," said Abdul Hamid Nomani, Spokesperson, Jamiat-Ulema-e-Hind.

The BJP has already demanded that the minister must be suspended.

"As the UP state government's minister has made such a statement, it should be taken as a statement made by the UP government and that minister should either resign or be suspended," said Rajnath Singh, President, BJP.

Via The Jawa Report, which has more.