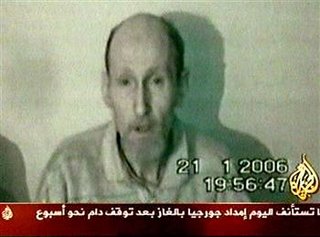 From the Associated Press:

WASHINGTON - An American who was among four Christian activists kidnapped last year in Iraq has been killed, a State Department spokesman said Friday.

The FBI verified that a body found in Iraq Friday morning was that of Tom Fox, 54, of Clear Brook, Va., spokesman Noel Clay said. He said he had no information on the other three hostages.

Fox's captors, a group calling themselves "The Swords of Righteousness Brigade", recently released a video of the other three CPT hostages.

Via The Jawa Report.