From the Parsippany Daily Record:

The school board's president, Robert Perlett, said the 8:30 a.m. meeting was called by mutual agreement on Thursday as the uproar surrounding the mock tribunal escalated on the Internet and talk radio.

Perlett said no decision had been made to halt the trial, which is to enter a fourth day today after classes were canceled Thursday due to the snowstorm.

You may be wonder, as I did, why the teacher rants and mock trials seem to promote only one political point of view. For instance, why haven't we heard about a mock trial deciding whether or not the New York Times violated the Espionage Act and committed treason when they published details of the NSA's terrorist communication intercept program? 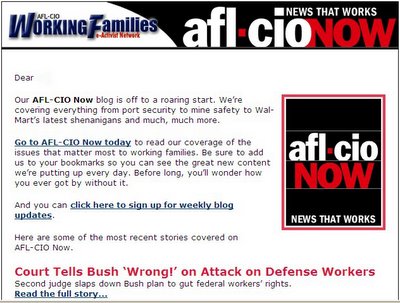 One big reason is that propaganda like this is emailed to the nation's teachers several times a week, since the National Education Association decided to "partner" with the AFL-CIO.