Reuters photographer Adnan Hajj is given credit for the photo below, which shows obvious manipulations to the smoke clouds, and possibly, some of the buildings. 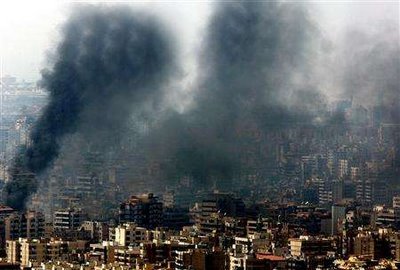 The smoke has been augmented using a "clone tool" common to photo-retouching software. The clone tool copies a selected section of a photo and allows it to be pasted and repasted elsewhere. Notice the three nearly identical areas in the left-hand cloud. Smoke doesn't form this way.

Of course, fake news is not really news. I wrote about AP reporter Mohammed Barakat's suspiciously virulent anti-Western bias over a year ago. AP never replied to inquiries about Barakat's background.

Via The Jawa Report.