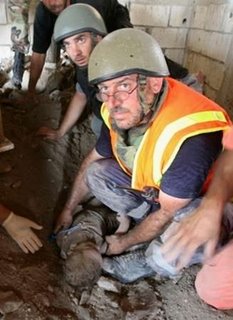 The mysterious man dubbed "Green Helmet", who seemed to be everywhere a child's body required display for the news cameras at Qana (identified as a "civil defense worker" by the press) has been identified. His name is Abu Shadi Jradi and he drives a refrigerated truck used for transporting corpses from place to place.

The tantalizing question, which may never be answered, is this: was Abu Shadi's refrigerated truck empty when he arrived at Qana that morning?

One might also ask: why was a "mortician" was among the first to be called to a presumed rescue situation, the very same "mortician" who ten years ago was posing headless child corpses?

Mr. Shadi had claimed much numbers twice as high, repeated -- even to this day. "Green Helmet" says in the video that fifteen bodies have been pulled from the wreckage, and he estimates that there were 210 (!) total victims.

The Red Cross and Human Rights Watch now confirm that the quantity of deaths has been greatly exaggerated, nearly double what was claimed by Lebanese officials. There were not "dozens" of children killed, as early reports have claimed.

And there really is no way to know by how much the deaths have been "padded" with refrigerated and transplanted corpses from Tyre or other locations.

And there remains the horrific possibility, as reported in a Lebanese publication but not confirmed, that Hezbollah placed rocket launchers on the roof and brought disabled children and the aged to be sacrificial victims, precisely as they became, possibly after a detonation of explosively charges long after the Israeli attack.

Via Confederate Yankee, by way of The Anti-Idiotarian Rottweiler.