Adnan Hajj, the Reuters photographer who was suspended earlier today for faking a picture of Beirut under attack has been fired.

From the horse's ass mouth:

LONDON (Reuters) - Reuters, the global news and information agency, told a freelance Lebanese photographer on Sunday it would not use any more of his pictures after he doctored an image of the aftermath of an Israeli air strike on Beirut.

A freelancer who worked for them from 1993 until 2003 and 2005 until now. Wanta bet this wasn't the first time he's done this sort of thing?

Reuters withdrew the doctored image on Sunday and replaced it with the unaltered photograph after several news blogs said it had been manipulated using Photoshop software to show more smoke.

Reuters has strict standards of accuracy that bar the manipulation of images in ways that mislead the viewer.

Ri-ight. Wonder how Add-on Hajj's amateurishly doctored photos made it past the eleventy-seven layers of editors that the Old Media assures us are ever vigilant in filtering out this sort of thing?

"The photographer has denied deliberately attempting to manipulate the image, saying that he was trying to remove dust marks and that he made mistakes due to the bad lighting conditions he was working under," said Moira Whittle, the head of public relations for Reuters.

Yeah...that's the ticket. Except ol' Add-on was working on a computer; hard to see how "lighting conditions" could cause you to accidentally clone smoke clouds and buildings and add them to an image to exaggerate the damage caused by the evil Zionist dogs.

He was among several photographers from the main international news agencies whose images of a dead child being held up by a rescuer in the village of Qana, south Lebanon, after an Israeli air strike on July 30 have been challenged by blogs critical of the mainstream media's coverage of the Middle East conflict.

Reuters and other news organizations reviewed those images and have all rejected allegations that the photographs were staged.

They reject them because their Middle Eastern freelance photographers and stringers have assured them that it wasn't staged.

Oh, and Reuters? One last thing. Here's another photo that Hajj faked: 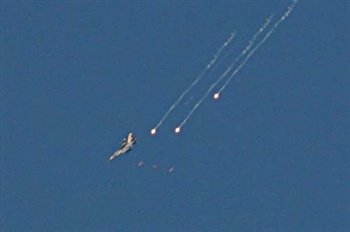 Notice anything about the flares? They're all the same one, copied and pasted; and the "missiles"? Same deal (Thanks to The Jawa Report).

Looks like Add-on Jihadi Hajj really made you his bitch.

Better get those eleventy-seven layers of editors going through those ten years plus of photos...