Reuters withdraws photograph of Beirut after Air Force attack after US blogs, photographers point out 'blatant evidence of manipulation.' Reuters' head of PR says in response, 'Reuters has suspended photographer until investigations are completed into changes made to photograph.' Photographer who sent altered image is same Reuters photographer behind many of images from Qana, which have also been subject of suspicions for being staged.

Reuters is not the only news service that employs unvetted Middle Eastern locals as stringers and correspondents. All of the major news services do. 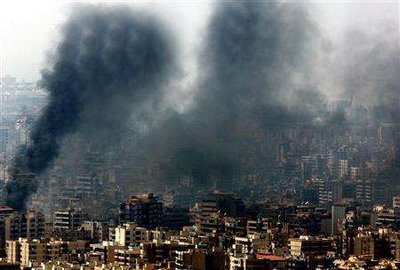 And here's the correction: 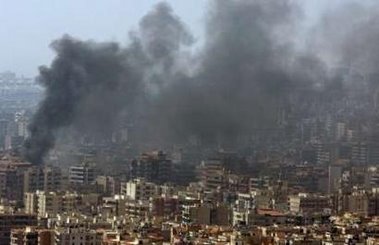 ATTENTION EDITORS: THIS IS A CORRECTED FILE OF LBN20. REUTERS HAS ISSUED A KILL OF THE PREVIOUS VERSION. Smoke billows from burning buildings destroyed during an overnight Israeli air raid on Beirut's suburbs August 5, 2006. Picture taken August 5, 2006. REUTERS/Adnan Hajj (LEBANON)

In an equally stunning development involving Reuters, ynetnews.com reports that another Reuters employee has been suspended after sending an email to little green footballs' Charles Johnson saying, "I look forward to the day when you pigs get your throats cut."

In the threat, the Reuters staff member, who has not been named, left his email address as "zionistpig" at hotmail.com.

Reporting the message to his readers, Johnson wrote on his website: "This particular death threat is a bit different from the run of the mill hate mail we get around here, because an IP lookup on the sender reveals that he/she/it was using an account at none other than Reuters News."

Speaking to Ynetnews, Johnson said: "I was surprised to receive a threat from a Reuters IP, but only because it was so careless of this person to use a traceable work account to do it."
He added: "I think it's more than fair to say that Reuters has a big problem."

That's what scruffy bloggers get when they "speak truth to power".

Via Left & Right and Hot Air.

Cross-posted at The Jawa Report.