Masturgate, the scandal precipitated by the news that Representative Mark Foley (R-FL) was engaging in inappropriate behavior with former House pages, even possibly grooming underage current pages for sexual activity once they reached legal age, has the country fixated on why Foley wasn't stopped sooner.

Democrats, through their spokespersons in the mainstream media (especially ABC's Brian Ross, who has some...accuracy issues), have kept the controversy alive. One can only conclude that the Democratic Party is not merely politicizing this seamy episode, but has truly turned over a new leaf since the days of Reynolds, Studds, Franks, and Clinton. All Americans should take them at their word, that they are sincerely willing to do whatever it takes. After all, Masturgate is much more serious a threat to the Union than anything that might have happened in New York City, Washington D.C., or Shanksville, Pennsylvania.

I have devised a scheme that will make it virtually impossible for members of Congress to work their lechery upon the tender bodies of young former Pages who have recently acquired their majority.

Phase One: All Congressmen will be subjected to a battery of tests, including polygraph (lie detector) and photo association using priapo-stimulation telemetry (erection detection) that will identify those members of Congress who are homosexuals. While no one has been so crude as to mention it (until now) one of the major factors driving the Foley scandal is its homoerotic nature. Once the Congressional homosexuals are identified, preventing an exact Foley-type incident will be easy; we simply monitor all of their communications - telephone, email, instant message, snail mail, conversations..everything. It may seem an onerous burden to place upon these public servants, but, think of the children.

Phase Two: Once the reprehensible Rump Rangers of the House and Senate are safely identified and under surveillance, we can ferret out those heterosexual Members (no pun intended) who might conceivably become a danger to the purity of our youth. The photo below was taken of the entertainer Britney Spears before she reached her eighteenth birthday. A positive reaction using the aforementioned erection detection technology will mean that these dirty old men will also be added to the surveillance list. 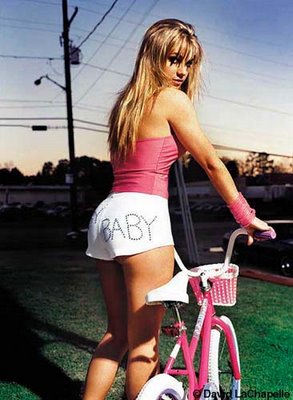 Phase Three: Homosexual Congressmen who somehow manage to elude the surveillance and have sex with former pages shall be chemically castrated. Heterosexuals who do the same will be forced to watch the video clip below, which should prove even more effective: