Wild Bill at Passionate America has discovered that one of the alleged Foley emails circulating among the MSM and leftwing blogs has been forged.

The two conflicting Foley emails come from Stop Sex Predators and citizens for responsibility and ethics in Washington (this one has since been removed by CREW).

The two emails are below. Wild Bill marked the differences he saw with red arrows. I've noticed a couple more, and marked them in green text. Click to enlarge. 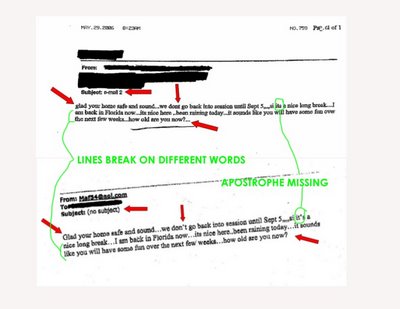 Now, I think that Foley's resignation proves he was up to no good, and if it was pedophilia, good riddance. But someone else is manipulating this story. The Justice Department needs to find out who that is.