Muslims have set up a group called Oul-Al-Albab/Oul-Al-Absar at YouTube that targets videos and users critical of Islamist violence. YouTube's poorly thought out flagging procedures encourage dishonest users to lie about content in order to suppress videos with which they disagree. YouTube has refused to change the system, despite numerous complaints from users that certain groups, particularly those sympathetic to Islamic terrorism, are abusing it. 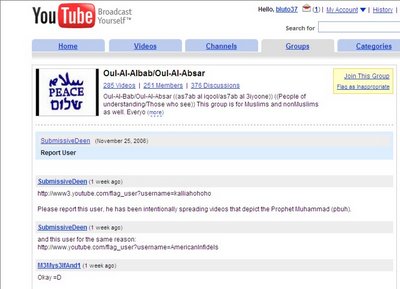 The group members share information about YouTube users who create anti-Islamist terrorist videos and instruct members to flag the videos and users as "inappropriate," often getting the videos and/or users banned. 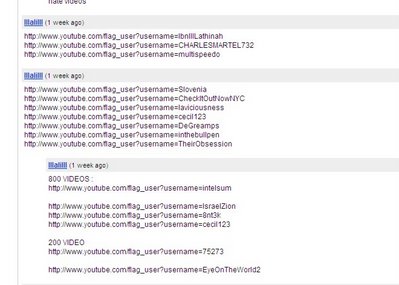 Here, a user instructs a fellow Muslim about how to game the YouTube system to censor anti-terrorist videos:

jafour3 (1 week ago)
You can give them only 1 star and click on "Flag unappropriate" and choose "Hate Speech".. You can find it under each video you watch.

"jafour3" lists his home as Palestine. While the group includes 251 members from all over the world, most seem to live in Canada and the United States.