73-year-old Kurt Westergaard and his wife are out on the street because of threats made against him by Muslim extremists. Westergaard is the artist who created the iconic image below for the Danish newspaper Jyllands-Posten, which also published "blasphemous" cartoons from 11 other cartoonists, touching off riots across the Muslim world (and spilling into civilized countries with large Muslim populations). 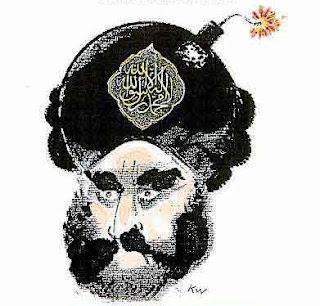 He was booted from his police-protected hotel room on Feb. 15 for being "too much of a security risk." And now the 73-year-old cartoonist and his wife are without a place to live.

Westergaard was forced to leave his actual residence in November after the Danish security and intelligence agency, PET, informed him of a "concrete" plan to murder him, according to the paper that originally published the cartoons, Jyllands-Posten. Westergaard and his wife have been living under police protection since.