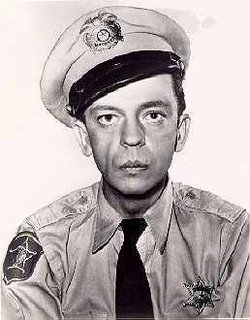 From the LA Times:

Don Knotts, the saucer-eyed, scarecrow-thin comic actor best known for his roles as the high-strung small-town deputy Barney Fife on the 1960s CBS series "The Andy Griffith Show" and the leisure-suit-clad landlord Ralph Furley on ABC's '70s sitcom "Three's Company," has died. He was 81.

Knotts, who lived in West Los Angeles, died Friday night of lung cancer at a Los Angeles hospital, according to Sherwin Bash, his longtime manager.

When I was a kid our TV got only two stations. One of them carried The Andy Griffith Show. The world will be a less interesting place without Deputy Barney Fife.

Also posted at The Jawa Report.