ACLU Rides to the Rescue of Veterans' Funeral Desecraters

Yesterday I wrote about the disgusting inbred gaggle of hicks who make up the Westboro Baptist Church, and get their sick kicks picketing the funerals of soldiers killed in the War on Terror. 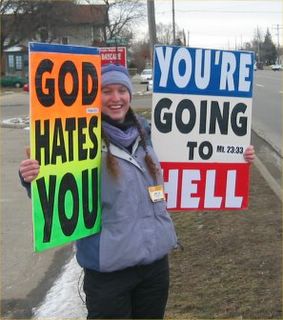 Today, John at Stop the ACLU notes that (big surprise) the ACLU is going to bat for these degenerate hatemongers:

In reaction some states are creating laws to limit these protests with buffer zones. While most reasonable folks can see the common sense in this, the American Civil Liberties Union are calling it Unconstitutional.

Yes, wherever some aspect of the Constitution can be twisted to an evil purpose, the knights of the American Civil Liberties Union can be found.