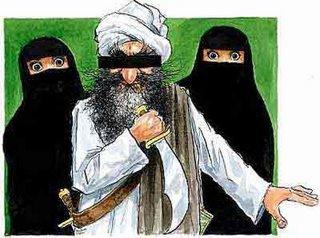 From SFGate, via the Drudge Report:

Borders and Waldenbooks stores will not stock the April-May issue of Free Inquiry magazine because it contains cartoons of the Prophet Muhammad that provoked deadly protests among Muslims in several countries.

"We absolutely respect our customers' right to choose what they wish to read and buy and we support the First Amendment," Bingham said. "And we absolutely support the rights of Free Inquiry to publish the cartoons. We've just chosen not to carry this particular issue in our stores."

As an avid reader, Borders and Waldenbooks are not stores I frequent anyway. Waldenbooks selection is severely limited, and Borders has a habit of augmenting their limited selection by placing years-old titles on their shelves as if they were newly released.