From a Department of Defense press release:

The Department of Defense POW/Missing Personnel Office (DPMO)
announced today that the remains of eleven U.S. airmen, missing in action from World War II, have been identified and are being returned to their families for burial with full military honors.

On April 16, 1944, Paschal and Widsteen were piloting a B-24J Liberator with the other nine men aboard. The aircraft was returning to Nadzab, New Guinea after bombing enemy targets near Hollandia. The plane was last seen off the coast of the island flying into poor weather.

Most of the men will be buried today in Arlington National Cemetery. The families of three of the men have decided to bury them in their hometowns. 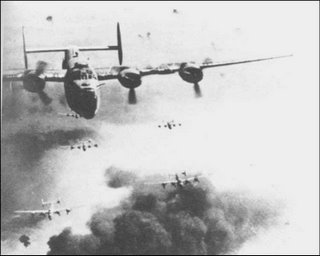 Cross-posted at The Jawa Report, and Vince Aut Morire, and Stop the ACLU.