Granny Get Your Gun

A Palestinian grandmother has become the latest smithereen commando. 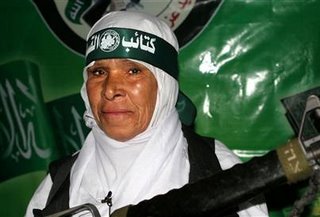 JEBALIYA, Gaza Strip - A 64-year-old Palestinian grandmother blew herself up near Israeli troops sweeping through northern Gaza on Thursday, and eight other Palestinians were killed in a day of clashes and rocket fire.

The militant Hamas, which is in charge of the Palestinian government, claimed responsibility for the suicide attack and identified the bomber as Fatma Omar An-Najar. Her relatives said she was 64 — by far the oldest of the more than 100 Palestinian suicide bombers who have targeted Israelis over the past six years.

As if anyone with two brain cells to rub together needed any more evidence that the Palestinian "culture" is terminally diseased.