Chuck Adkins' Address, Phone Number, and an Aerial View of His Home

Update: Adkins has pulled the Malkin post! In its place is this "explanation":

Because I received an e-mail from a Newspaper Reporter/Blogger telling me that they’re doing a investigative piece on Michelle Malkin. She didn’t want Malkin playing the victim card. So, it’s gone.

So, Chuck is now admitting that mainstream reporters collude with liberal bloggers in order to enhance their stories. Maybe that's an indication of why most Americans don't trust the MSM. End Update

Upset that Michelle Malkin would actually practice journalism concerning Democrat propaganda tools the Frost family, lefty psycho Chuck Adkins has posted her address, phone number, and an aerial view of her house (just in case his fellow troglodytes have trouble finding it). My guess is that Michelle won't be intimidated.

But guess what? Adkins' personal information is available from ZabaSearch with a little digging.

The difference between Chuck and me, however, is that I won't publish it in an effort to terrorize him out of his First Amendment rights.

I will post an aerial view of Chuck's house though: 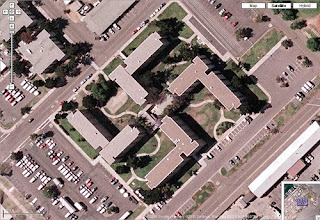