Best news I've seen all day. A jury has awarded $2.9 million* in compensatory damages to the father of a Marine killed in Iraq from the vile Westboro Baptist "Church." Punitive damages are yet to be determined:

Albert Snyder of York, Pa., the father of a Westminster Marine who was killed in Iraq, today won his case in a Baltimore federal court against members of Topeka, Kan.-based Westboro Baptist Church who protested at his son's funeral last year.

This is the Westboro folks in action: 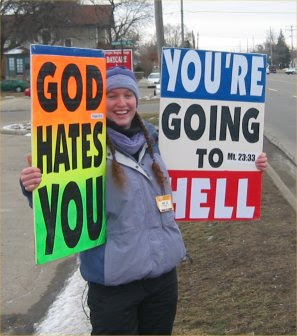 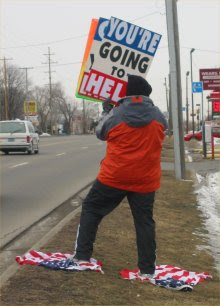 Even the size of the award for compensating damages "far exceeds the net worth of the defendants," according to financial statements filed with the court, U.S. District Judge Richard Bennett noted.

Maybe they can work it off in Hell.

*I'd like to thank commenter Jim for pointing out that I had made an editing error when I first posted this, leaving the word "been" in the hyperlink. I changed the phrasing of the post while editing and forgot to change the wording in the link. Jim has performed his duty above and beyond what the average Greenwaldian douche would do, reaching new heights of pettiness and snot content, while having the courage to completely ignore the important and wonderful news in the post itself. Thank you so much, Jim. America needs more people like you.