As A.J. at the Strata-Sphere notes, both Newsweek and the UN have acknowledged the success of the US troop surge, as seen in a 95% reduction in war violence in Iraq and the flight of al Qaeda terrorists into Pakistan:

Here is the essence of it all. The Surge is working and working very, very well. Iraq is experiencing such a dramatic change in fortunes the anti-war left is in complete denial that their hopes of US failure will now never come true. To underline this we can see by the statistics on death and violence in Iraq how much thing have changed. 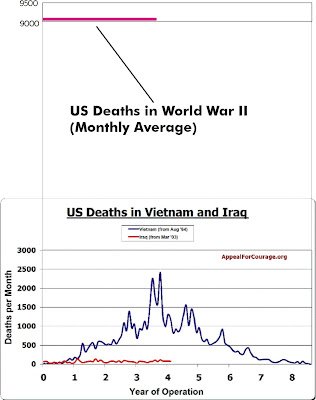 The base chart comes from the Appeal For Courage. I've added the WWII casualty figures. And the chart isn't meant to compare wars. It's meant to compare the effect on homefront civilians of incredibly biased, partisan reporting from folks who claim to be journalists.