Oceania Has Always Been at War With Eurasia* 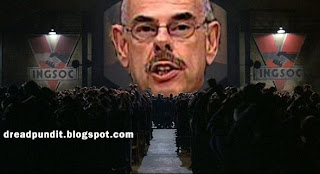 Rep. Henry Waxman has asked his investigative staff to begin compiling reports on Limbaugh, and fellow radio hosts Sean Hannity and Mark Levin based on transcripts from their shows, and to call in Federal Communications Commission chairman Kevin Martin to discuss the so-called "Fairness Doctrine."

"Limbaugh isn't the only one who needs to be made uncomfortable about what he says on the radio," says a House leadership source. "We don't have as big a megaphone as these guys, but this all political, and we'll do what we can to gain the advantage. If we can take them off their game for a while, it will help our folks out there on the campaign trail."

A committee chairman openly using taxpayer funds to investigate broadcasters in hopes of accruing political advantage to his party?

I expect every weasel who has whined, puled, shrieked, whimpered, insinuated, sniveled, and otherwise complained about intercepting overseas calls from terrorist suspects to and from American citizens to register their outrage at this blatant bid for totalitarian power by some Democrats in the House.

*Thanks to Good Lt. of The Jawa Report for reminding me of that chilling quote from 1984.