"Rescuer" poses as victim
Gateway Pundit has discovered that a photo from this New York Times interactive feature (number 15) apparently shows a man pretending to be dead for the photographers. The same man is seen scrambling among the rubble in other shots. 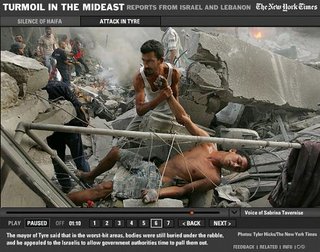 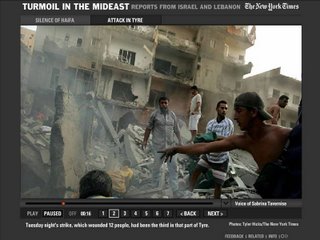 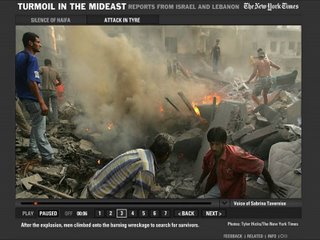 It's hard to see how NYT reporter Sabrina Tavernise and photographer Tyler Hicks could have been unaware of this Hezbollywood production going on right under their noses.

A picture caption with an audio slide show on July 27 about an Israeli attack on a building in Tyre, Lebanon, imprecisely described the situation in the picture. The man pictured, who had been seen in previous images appearing to assist with the rescue effort, was injured during that rescue effort, not during the initial attack, and was not killed.

The correct description was this one, which appeared with that picture in the printed edition of The Times: After an Israeli airstrike destroyed a building in Tyre, Lebanon, yesterday, one man helped another who had fallen and was hurt.

You can believe as much of this as you choose. Frankly, I think the "injured" man acquired his acting skills by watching cheesy old movies like "Gone With the Wind".

Via The Wandering Jew.