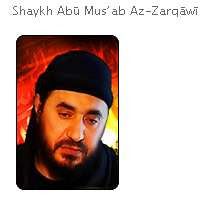 Yet another reporter stakes out Charlotte's most famous jihad supporter, Samir Khan--aka, inshallahshaheed [God willing, a martyr]. You'll notice that when asked whether he is helping recruit for terror or al Qaeda he answers the question: No.

Which of course, is probably true. Encouraging readers to join the mujahideen and then constantly praising al Qaeda isn't the same thing as actually working with al Qaeda directly. I encourage people to join the U.S. military, but I don't get a paycheck. Indirectly? Well, that's another matter altogether.

As a reminder on what he's all about, the pic above from his "About Us" page shows one of the dozens of "scholars" he claims people can learn from. Yes, that's al Qaeda's former #1 in Iraq, Abu Musab al-Zarqawi, infamous for the dozens of civilian hostages he beheaded on film.

If our country had any balls, of course, we'd level charges of sedition or aiding and abetting the enemy. But we don't. Our lawyerly class has long since forgotten the fate of Nazi supporters in America during WWII.

I wonder, had the reporter asked whether or not Samir was recruiting for the Shabaab terrorists in Somalia if he would answer the same way?

Here's the money quote, which isn't actually a quote at all:

"Samir, are you anti-American?" asks Grantham. He doesn't respond.

Apparently the TV station is going to air the second part of the "investigation" tonight. In it we're going to learn where Samir works. Here's a hint: the intertubes are involved.

Thanks to Bill Warner who was interviewed extensively for the story.

Post by the Macktastic Rusty Wicked Cross posted from The Jawa Report.

Th-th-th-that's All For Now, Folks!

At least until after carpal tunnel surgery sometime in September. Then we'll see.

From the Dry Bones Blog.

Terrorist-insurgents, believing themselves to be concealed in a palm grove, are exterminated by 30mm fire from an Apache attack helicopter that has been tracking their movements on infrared all along. Note the extraordinary lengths US commanders go to in order to verify the targets.

Here's the latest bit of scaremongering from the Global Warming lunatics:

A gas used in the making of flat screen televisions, nitrogen trifluoride (NF3), is being blamed for damaging the atmosphere and accelerating global warming.

It appears that the only way to avert setting the atmosphere on fire via Global Warming is for all of us to move into caves...and breathe as little as possible. I say the smelly hippies go first.

Having rashly attacked US Soldiers instead of their usual prey, schoolchildren or bound hostages, terrorist-insurgents cower in fear for several minutes as an F-18 engages them with rockets and guns.

Thanks to Liveleaker Iraqi Translator USMC.