Enjoy this short from Will Ferrell while I'm mellowing out on the Jersey shore.

The Landlord from Will Ferrell

'This is what happens to black men arrogant boneheads in America'

The Boston police sergeant singled out for criticism by Obama based on his race refuses to apologize:

But people who know Crowley were skeptical or outright dismissive of allegations of racism. A prominent defense lawyer, a neighbor of Crowley’s, his union, and fellow officers described him yesterday as a respected, and respectful, officer who performs his job well and has led his colleagues in diversity training.

“He’s evenhanded and, in the cases I’ve had with him, he’s been very much in control and very professional,’’ said Joseph W. Monahan III, a criminal defense lawyer in Cambridge and former Middlesex County prosecutor.

The Smoking Gun has the arrest report, which seems to indicate that the sergeant performed his duties properly while being badgered by Gates, who immediately played the race card. Obama may want to rethink his knee-jerk support of this particular jerk.

Oh, by the way, according to the police report the reason Gates' door was jammed was because of a break-in that occurred previously.

Barbara Boxer, previously shown to be a level 10 asshole, gets her comeuppance from Harry C. Alford, Chairman and CEO of the National Black Chamber of Congress.

Have a great Fourth of July! 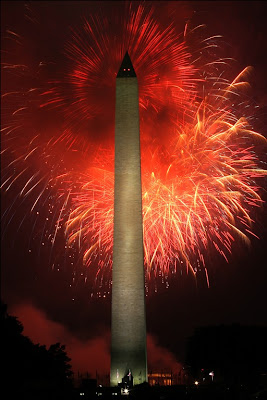 For our lefties: have a fruitful, somber contemplation of the many peoples that the American capitalist plutocracy has deliberately oppressed to enrich the coffers of the wealthy elite, while keeping the bourgeoisie ignorant and complacent.

But I'm sure they have hearts of gold.

Washington Post publisher Katharine Weymouth said today she was cancelling plans for an exclusive "salon" at her home where for as much as $250,00 The Post offered lobbyists and association executives off-the-record, nonconfrontational access to "those powerful few": Obama administration officials, members of Congress, and even the paper’s own reporters and editors.

Irony of ironies: the Post's whorishness was exposed by a lobbyist.