How Charles Johnson Became a Liberal

Apparently, the answer is yes.

Over at The Volokh Conspiracy author Kenneth Anderson brings into question Clinton administration actions during the siege of the Branch Davidian nutbags at Waco in light of Clinton's recent vendetta against the First Amendment as it applies to conservative groups:

But the FBI knew beforehand that adults in the compound had gas masks; the gas therefore would not put pressure on them. On whom, then? If the FBI knew that the adults had gas masks, but went ahead with the gas attack anyway, it is plain that this “pressure” was brought directly against the children because, as the FBI knew, they could not fit into adult– size gas masks. “Maternal feelings”, the FBI hoped, would be unleashed in the mothers by watching their children choking, gasping and blistering from the gas.

In which the Tea Partiers pwn their detractors and Nazi Pelosi gets a multiple teabagging:

Thanks to Ann Althouse.

Waxman, (Dillweed-CA) Flew into a snit when several large companies announced that Obamacare would cost them millions and decided to call them on the carpet in front of his committee.

A House Energy and Commerce Committee spokeswoman tells me that Chairman Henry Waxman, D-Calif., has indeed cancelled the April 21 subcommittee hearing in which CEOs were to testify about Obamacare.

Why? As it turns out, and Waxman's staff could have found out with a minimum of research, the companies were legally required to report the impact of the new socialized medicine law on their bottom lines:

The CEOs, required by law to be honest about earnings projections, re-stated their bottom lines in reaction to Obamacare's passage, earning the ire of Waxman and other Democrats.

Hearings on this matter would likely have proved an embarrassment to the Democrats and helped drag out discussion of Obamacare's unexpected ill effects.

Increasingly frustrated now that their Anthropogenic Global Warming Scam has been exposed, Greenpeace activists are going all medieval, as BC at The Anti-Idiotarian Rottweiller explains:

After initially allowing one of their limp-wristed Glow Bull Wormers, Gene Hashmi, to post a de facto threat against anyone who doesn’t drink Algore’s Klimate KoolAid®, GreenPiss got dog-piled in their comments section and decided to move it here, in a weak-assed attempt to put a bit of distance between themselves and the idiot author and trying to build a post facto wall of “plausible deniability“.

If you’re one of those who have spent their lives undermining progressive climate legislation, bankrolling junk science, fueling spurious debates around false solutions, and cattle-prodding democratically-elected governments into submission, then hear this:

And we be many, but you be few.

Why was the threat moved off of Greenpeace's official site? It was done, as they say, "...in the interest of transparency."

Here's US Representative Phil Hare (D-IL) flying into a snit and telling some constituents that he doesn't "...care about the Constitution." When asked where in the Constitution health care is mentioned, Hare mistakenly quotes the Declaration of Independence.


The whole thing would be pathetic if the incident weren't so appalling. And if Hare were the only Democrat who regularly uses the Constitution for toilet paper.

Forward! To The Future!

Sixteen thousand new IRS agents take their solemn vows to the Fatherland, pledging to root out and punish any malcontents and shirkers who refuse to submit to the glorious new health care reform laws. 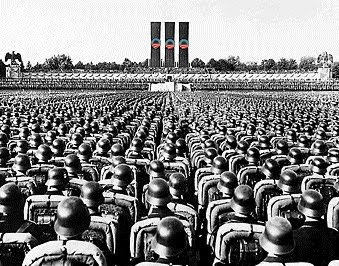