"Lackey" and "Puppet" in the Same Sentence...

...just like old times - I can almost hear Khrushchev's shoe pounding on the table.

From the so-called "Iraqi Resistance":

The correspondents found that the Iraqi Communist Party, a lackey organization of the US invaders, and the National Accord Party, which is led by puppet “prime minister” Iyyad ‘Allawi, hired groups of women, children, youths and unemployed persons to work for them. These people were trotted before television cameras several times on Sunday to claim that there was “heavy voter turnout” at the polling places. 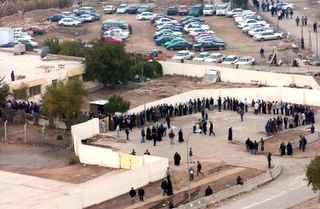