From the Fox News affiliate in Dallas comes word that one Marine veteran's bumper stickers are under attack by his homeowners association as prohibited "advertising":

Otherwise, the homeowners association for The Woodlands II on The Creek --- where Larimore has lived for eight years --- says in a letter it will tow the car at Larimore's expense. The board also threatens to fine him $50 for any future incident.

Larimore says the decals, ranging from the Marine emblem to Semper Fi slogans, aren't advertisements for anything. "You can't buy freedom," he reasoned.

The Woodlands II on the Creek Homeowners Association versus a lone Marine. The assweasels at this HOA better start praying for reinforcements because right now they're outnumbered.

Fit For a Queen 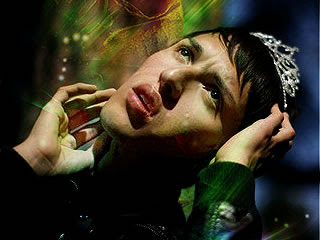 When an openly gay high school senior was voted prom queen at his Los Angeles high school last weekend, the school's students and officials not only accepted it, they basked with pride in being one of the most diverse and tolerant schools in the nation.

Why can't Johnny read? In large part because his school officials are idiots. The Queen was crowned not because high school teenagers have suddenly become thoughtful, tolerant young adults, but because they thought it was funny.

Obama's Justice Department has decided that uniformed Black Panthers are allowed to violate the 1965 Voting Rights Act by intimidating voters at the polls:

The lawyers also had ascertained that one of the three men had gained access to the polling place by securing a credential as a Democratic poll watcher, according to interviews and documents reviewed by The Washington Times.

The career Justice lawyers were on the verge of securing sanctions against the men earlier this month when their superiors ordered them to reverse course, according to interviews and documents. The court had already entered a default judgment against the men on April 20. 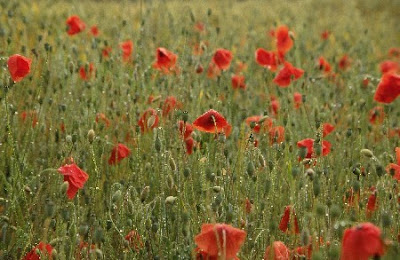 IN FLANDERS FIELDS the poppies blow
Between the crosses row on row,
That mark our place; and in the sky
The larks, still bravely singing, fly
Scarce heard amid the guns below.

We are the Dead. Short days ago
We lived, felt dawn, saw sunset glow,
Loved and were loved, and now we lie
In Flanders fields.

Take up our quarrel with the foe:
To you from failing hands we throw
The torch; be yours to hold it high.
If ye break faith with us who die
We shall not sleep, though poppies grow
In Flanders fields.

Trying to Fix What Ain't Broke

President Obama, using his snottiest, most condescending voice said that:

"Decisions that were made over the last eight years established an ad hoc legal approach for fighting terrorism that was neither effective nor sustainable – a framework that failed to rely on our legal traditions and time-tested institutions; that failed to use our values as a compass," Obama said. "And that is why I took several steps upon taking office to better protect the American people."

Um, Barry, you can't bat any better than 1000, and, much as you loathe the reality, that's exactly what the Bush administration did following 9/11.

Speaking of Darth Cheney, he had this advice for the Boy President:

"A lot rides on our President’s understanding of the security policies that preceded him. And whatever choices he makes concerning the defense of this country, those choices should not be based on slogans and campaign rhetoric, but on a truthful telling of history."

Related: Cheney's popularity on the rise. Coincidence? I think not.

In the case of House Speaker Nancy Pelosi, a leading supporter of the waterboarding Inquisition, it's because she's an idiot:

House Speaker Nancy Pelosi has backed down slightly in her fight with the CIA, saying that she really meant only to criticize the Bush administration rather than career officials.

"My criticism of the manner in which the Bush Administration did not appropriately inform Congress is separate from my respect for those in the intelligence community who work to keep our country safe," Pelosi said in a statement.

Really? Are you sure Nancy? Let's look at the transcript from your earlier meltdown news conference:

QUESTION: Madam Speaker, just to be clear, you're accusing the CIA of lying to you in September of 2002?

Not me, Jules Crittenden is asking the question:

Should people who deny fundamental biological facts and claim to be of the opposite gender be entrusted with large public conveyances that carry dozens of commuters?

But I'm definitely interested in the answer, too. Sure, it's funny using the entire country as a massive social experiment...until somebody gets hurt.

Jules has a picture of the...um...gentleman responsible for the accident.

It's always nice to link the New York Times when it's a story that the degenerate weasels who work there hated to have to write:

It was a happy ending to what Ms. Prejean and Mr. Trump had described as a traumatic period of “abuse” of her because she had said honestly that she believes marriage should be between one man and one woman. Ms. Prejean noted that both President Barack Obama and Secretary of State Hillary Rodham Clinton share that view.

Note the scare quotes around the word "abuse," as if being viciously attacked for simply answering a question honestly is nothing to get worked up over.

Typically, the New York Times cares about free speech only when someone complains about the newspaper itself say, publishing diagrams designed to help Islamist terrorists kill American troops more efficiently, or exposing covert operations designed to protect their fellow Americans.

Trump, dead woodland creature on his head and all: good show.

Deconstructing the Case Of Lt. Choi

Assorted lefties and the Gay Mafia are all up in arms about this story:

In spite of President Obama's declared stance against the "don't-ask-don't-tell" policy that keeps openly gay individuals out of the military, the U.S. Army on Thursday told Lt. Dan Choi he is being dismissed for publicly revealing his homosexuality.

The standard line seems to be that we can't afford to lose people like Lt. Choi, who speaks Arabic, just because they're gay.

Let's assume that Lt. Choi is at least of average, if not superior, intelligence. From that, it follows that Lt. Choi was fully aware of the "don't ask, don't tell" policy put in place by the Clinton administration. Lt. Choi, not being an idiot, could assume that his superiors would take note of his MSNBC television appearance, in which he publicly announced his sexual orientation. And it logically follows that Lt. Choi would be discharged for violating the policy.

Therefore, Lt. Choi, knowing that his skills were valuable to his nation's security, chose to forfeit his military career, depriving the military of those skills, in order to make a socio-political point on a television show. Thus, Lt. Choi values his sexual preference subculture above his country.

Not only is this a monumentally dysfunctional decision, it brings into question Lt. Choi's judgement.

We just don't need platoon leaders, or linguists, with bad judgement and divided loyalties serving in the military.

The Botox made her say it.

Intelligence officials released documents this evening saying that House Speaker Nancy Pelosi (D-Calif.) was briefed in September 2002 about the use of harsh interrogation tactics against al-Qaeda prisoners, seemingly contradicting her repeated statements over the past 18 months that she was never told that these techniques were actually being used.

Perez Hilton Has Convinced Me...

...that it's just wrong to try to hold a moderate position on homosexual issues.

The continued vicious persecution of Miss USA contestant Carrie Prejean clearly demonstrates that most gay men are too mentally unstable and utterly self-absorbed to function in society.

Heretofore I've followed a "live and let live" philosophy regarding homosexuality. It's not for me, but I don't want to see people persecuted for their sexuality, though I've never been comfortable with the 1970s political decision on the part of the American Psychiatric Association to pretend that homosexuality is a "lifestyle preference" rather than a mental illness. I viewed the resulting pretense that homosexuality could not be treated as similar to the controversy over whether or not the deaf should receive cochlear implants - misguided, but up to the individuals involved.

In fact, homosexuality is treatable; though the extent that treatment helps and the incidence of recidivism is open to debate.

I can no longer support the idea of civil unions for homsexual "couples." Congratulations, Perez, you convinced me to change my mind on that.

Side question: why is Perez Hilton such a huge snorting asshole? Is it because he's too fat, ugly, and obnoxious to get anyone to butter his muffin?

A leading bankruptcy attorney representing hedge funds and money managers told ABC News Saturday that Steve Rattner, the leader of the Obama administration's Auto Industry Task Force, threatened one of the firms, an investment bank, that if it continued to oppose the administration's Chrysler bankruptcy plan, the White House would use the White House press corps to destroy its reputation.

While most commentators are focusing on the charge of bullying and the denials from the White House (and the firm mentioned) no one seems to be questioning whether or not the White House press corps, supposedly made up of unbiased journalists from the country's leading media outlets, would act at the behest of an Obama official.

The utter corruption of the White House press corps seems to be a foregone conclusion, with good reason:

Unelected Clown-Governor David Paterson just cost the taxpayers of New York State $300,000 in order to settle a lawsuit for racism:

The lawsuit accused Paterson, the former Democratic leader of the New York State Senate, of firing a white Senate photographer so that a black photographer could be hired in his place. And to make matters worse, the Post reported, Paterson claimed in a sworn deposition that he didn't see well enough to have fired the photographer because of his race. A spokesman for Paterson later dismissed the comment as "a quip, a joke."

Even the state's famously boneheaded liberals have had enough (the 27% who still approve of Paterson's buffoonery are in the "mega-bonehead" or "Keith Olbermann" class).

The real question is, why is the State liable? Why isn't Paterson himself coughing up the 300 large? It's not so funny when you consider that Paterson's budget cutting measures include endangering New Yorkers by closing vital regional healthcare facilities. Without AL Lee Hospital in Fulton locals face an ambulance ride to Oswego (often impossible when lake effect snows strike) or a 40 minute jaunt to Syracuse (likewise not much fun in the winter).

Those three hundred thousand clams that Paterson just wasted might have kept Fulton with something more useful than the band-aid station into which the hospital has been converted.

This story actually broke before Spitzer resigned in disgrace - didn't get a lot of MSM coverage for some reason - certainly not because of his party affiliation.