Add blasphemy to the mix:

More at The Jawa Report.

President Goes to Copenhagen to Lobby for Chicago Olympics

Meanwhile, back in Chi-town:

Chicago might not be the best place for citizens of the world to be wandering around, taking snapshots and asking for directions.

Big Government: More on Astroturfing at the NEA

I have another post up at Big Government about a professional astroturfer from Winner & Associates involvement in the NEA scandal. Go check it out.

PS-Also check out Patrick Courrielche's post over at Big Hollywood in which he asks if Buffy Wicks shouldn't be the next one under the bus? Which is kind of important here, since the NEA director claims that the whole scandal was Yosi Sargent's fault.

But that can't be the case, since Wicks works for the White House, not the NEA. And Bim Ayandele, who's participation I think is key since he's a paid PR guy who specializes in getting entertainers to lobby for health care reform, worked in the same office at the White House as Wicks up until a couple of months ago.

Original Big Government: More on Astroturfing at the NEA post here at The Jawa Report.

(Note: This post is by Rusty Shackleford, Darth Odie is linkwhoring it here cause, well cause that's what I do)

Came across this vid while researching deer whistles.

One day at an unidentified school in South Jersey: 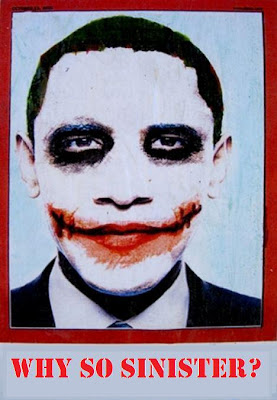 ...you didn't even know about.

Publius at Big Government reports the breaking news that the Internal Revenue Service is cutting its ties with...ACORN.

Now the Associated (with terrorists) Press reports that the IRS will no longer use ACORN as a volunteer organization offering free tax advice to low and moderate income folks. Apparently, they'll get a different group to handle the pimp and whore market.

It's simply astounding in how many places this corrupt organization has managed to insert its tentacles. Next we'll probably hear that ACORN is no longer a part of the Pentagon's volunteer civil defense plans.

Yes We Can Inspire Through Great Artworks

The White House is attempting to mimic Leni Riefenstahl by rounding up those in the arts and entertainment industry and using them as the vehicles through which President Obama can peddle his agenda...

5 begin. As people join us, I’ll ask them to mute

6 their phones periodically just so we can hear

7 everybody. This is Mike Skolnik. I am based in

8 New York. I am a film maker for the past ten years

9 but currently serve as the political director for

11 I have been asked by folks in the White

13 conversation that was had. We had the idea that I

14 would help bring together the independent artists

15 community around the country.

So what if a few rules and laws get bent? Artwork for the State can be truly inspiring.

North Syracuse police went to 115 Elm St. in the village around 1 a.m. after a man called 911 to report that two men kicked in his front door and attacked him. One of the males reportedly was wearing a ski mask, according to officer Jeffrey Tripp of the North Syracuse police.

The resident, identified as Jeff Bush, 22, and another person in the home fought with the men, then fatally shot one with a shotgun, according to Tripp.

The other alleged assailant, who was fighting with the other resident, was also shot by Bush, police said. He died while being taken to a hospital, police said.

In an effort to pad out the "news" broadcast tonight to avoid mentioning ACORN or Van Jones, NBC "news" reader Brian Williams interviewed Jimmy Carter, who claimed that the "overwhelming portion" of criticism of President Obama's policies is motivated by racism.

Real Clear Politics has the video of the failed ex-President making this ignorant, outlandish charge.

According to Carter, who gives every indication of suffering from senile dementia, racial politics trumps the Bill of Rights.

As James O'Keefe notes, Alinsky Rule #8: Keep the pressure on. Never let up.

ACORN employee admits to being a former madame and to "laying the groundwork" then shooting her husband dead without being charged.

Thanks to Mongol in the comments at The Jawa Report.

James O'Keefe and Hannah Giles continue their takedown of ACORN (Baltimore and DC vids here). Once again, the ACORN staffers freely advise the "pimp" and "prostitute" about subverting the law to obtain government aid for their "brothel."

MSM outlets continue to soft-peddle the story, if they bother to mention it at all. Looks like the MSM may get caught again with their pants down around their ankles, just as they did with the Van Jones resignation.


Visit BigGovernment.com to watch Part II of the Brooklyn Bust. 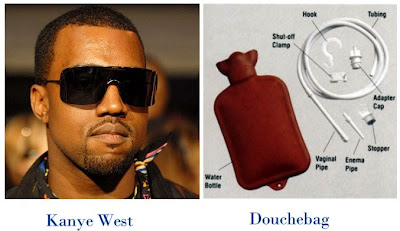 Can You Hear Us Now?

Headline in the UK's Daily Mail:

From Fox, the only network that has covered the hidden camera videotapes of ACORN employees counseling people posing as a prostitue and pimp about defrauding the IRS:

The Census Director has sent a letter to the National Headquarters of ACORN notifying the group that the Census Bureau is severing all ties with the community organizing group for all work having to do with the 2010 census.

Michelle Malkin has posted a PDF file of the Census Bureau's letter to ACORN explaining why they no longer wish to work with ACORN. The letter mentions the recent videotapes. This New York Times article about the Census Bureau action, curiously, does not. 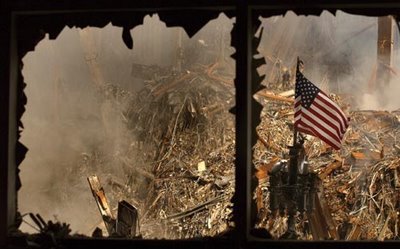 Théoden: So much death. What can men do against such reckless hate?
Aragorn: Ride out with me. Ride out and meet them.

The most important tidbit from today's Pelosi/Reid press conference:

"We still, after all these months, still have a place at the the table for Republicans," he said. "We do not want to do reconciliation unless we have no alternative."

Translation: "Ya needs 'protection,' see? Otherwise things might not be too healthy for ya. Now gimme da dough, see."

John Feffer, co-director of Foreign Policy in Focus at the radical, pro-Marxist Soros-funded Institute for Policy Studies gives us an "I'm okay, you're okay" look at suicide bombers.

Feffer's 3,375 word apologia is summed up in this passage

We have our suicide bombers—we call them heroes. We have our culture of indoctrination—we call it basic training. We kill civilians—we call it collateral damage.

Who are these holy martyrs to the cause of Western civilization? Well, Will Smith in the movie, I Am Legend. Sure, obviously a movie character blowing himself up to destroy a pack of zombie vampires is the exact equivalent of a devout Muslim youth walking onto an Israeli schoolbus wearing a suicide vest. Feffer also cites WWII-vintage American propaganda flicks (because Hollywood only makes propaganda for our enemies now).

But wait! Feffer has a military example from US history. Two hundred and five years ago a US Navy ship deliberately blew itself and its volunteer crew up trying to inflict damage on enemy vessels in Tripoli. Feffer describes the war against the Barbary Pirates as "America's first war against Islam." Forget the piracy, murders, hostage-taking, and demands for tribute.

And that's all it takes for Feffer to "justify" the 9/11 attacks. The terrorists hit the Pentagon, thus, 9/11 was a military strike, no different from American strikes in Iraq and Afghanistan.

And some, including one of the bloggers who exposed Van Jones, consider the Institute for Policy Studies to be the President's "idea bank."

Arianna Gets All Wee-Weed Up

Arianna Huffington has posted (or someone who speaks English has posted for her) a "thank-you" to Glenn Beck:

Thank you, Glenn Beck. By helping force the resignation of Van Jones, you have done a great service to your country. But in the exact opposite way than what you intended.

Your vile and vicious smear campaign has helped reverse one of the worst examples of miscasting since John Wayne took on the role of Genghis Khan in The Conqueror...

Contrary to the media caricature, the real Van Jones is a thoughtful leader who knows how to use words to move people to action. To stick him behind a desk, working out the details of tax credits for green jobs -- incredibly important though the job is -- was never the best use of his unique and abundant skills.

And, Jones is "...a thoughtful leader who knows how to use words..." You mean words like "asshole" Arianna? Does that move you?

You dirty girl, Arianna. Perhaps you need a spanking.

Let Me Be Crystal Clear on This

As my friend Jan Z said when he sent me this image, Vietnam vets seem to have a way with words. 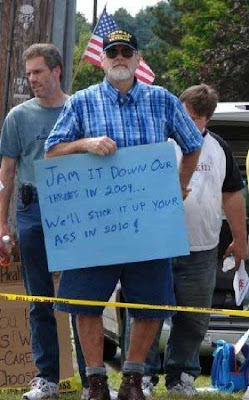 Mincing metrosexual milquetoast Keith Olbermann has posted an appeal at DailyKos for dirt on Glenn Beck. Seems to be a transparent attempt to boost his own ratings above those of SpongeBob reruns.

WASHINGTON (AP) - President Barack Obama's adviser Van Jones has resigned amid controversy over past inflammatory statements, the White House said early Sunday.
Jones, an administration official specializing in environmentally friendly "green jobs" with the White House Council on Environmental Quality was linked to efforts suggesting a government role in the 2001 terror attacks and to derogatory comments about Republicans.

This puts most major co-opted media outlets in the odd position of explaining Jones' departure for reasons they did not report and did their best to suppress.

Here's how Sarah Wheaton puts it at the New York Times:

In a victory for Republicans and the Obama administration’s conservative critics, Van Jones resigned as the White House’s environmental jobs “czar” on Saturday.

Actually Sarah, getting rid of this Red paranoid bigot is a victory for all Americans.

One of George Soros' pet whackjobs bit off the finger of a 65 year old ObamaCare opponent at a rally in Thousand Oaks, CA:

After the argument, Rice returned to where his own group was standing.

A man from Moveon.orgs area then walked over to the opponents and verbally confronted Rice, allegedly calling him names and acting aggressively, Bonfiglio said.

Rice later told investigators he felt threatened by the man and punched him in the nose, Bonfiglio said.

The punch set off a fist fight between the two men, during which the tip of Rices left pinky finger was bitten off, Bonfiglio said.

Rice drove himself to Los Robles Hospital and Medical Center in Thousand Oaks.

Another man found the bitten-off portion of the finger and brought it to Rice at the hospital, Bonfiglio said.

Big surprise. Get a rogue billionaire wannabe sonderkommando to fund a group of mentally ill activists and this is what you get.

A spokesweasel for MoveOn.org "regretted" the incident.

Get out the popcorn as Time's Dem partisan Joe Klein threatens to scratch out the eyes of Lefty McSockpuppet, Salon's Glenn Greenwald:

Twice in the past month, my private communications have been splashed about the internet. That such a thing would happen is unfortunate, and dishonorable, but sadly inevitable, I suppose. I ignored the first case, in which a rather pathetic woman acolyte of Greenwald's published a hyperbolic account of a conversation I had with her at a beach picnic on Cape Cod. Now, Greenwald himself has published private emails of mine that were part of a conversation taking place on a list-serve. In one of those emails, I say that Greenwald "cares not a whit for America's national security."

Why should Greenwald care, doesn't he live in Brazil?

Greenwald has slapped back with this typically verbose piece and by sending his braindead minions (all of them are "rather pathetic," Joe) to slime Klein's comments section.