Meanwhile, Back in Islamberg

Flying under the radar, thanks to political correctness, the training continues at Islamberg, a compound located in the Catskills about 150 miles from New York City:

Readers of Canada Free Press and the Northeast East Intelligence Network will recall our initial report published in February 2006 about Jamaat ul Fuqra, an Islamic terrorist group operating under the guise of legitimacy by adopting benign sounding identities such as the International Quranic Open University and the Muslims of the Americas. The reality is that Jamaat ul Fuqra is a fully operational Islamic terrorist organization firmly embedded throughout the U.S. and Canada and led by top Pakistani terror leader Shiek Mubarek Ali Gilani of Lahore, Pakistan. Gilani is most well known for his role in the death of Wall Street Journal reporter Daniel Pearl, a claim denied by Gilani and the subject of an ongoing dispute among terrorism investigators.

Federal investigators confirmed that Jamat ul Fuqra members have been responsible for at least a dozen murders, 17 bombings and fire bombings, and several assassinations and attempted assassinations. The perpetrators of those terrorist acts received their paramilitary training at the Islamberg compound in New York State. In the weeks preceding the 9/11 attacks, nearby residents to the Islamic compound witnessed male residents of the compound, dressed in military type fatigues, running in military style formation on the rural road adjacent to the Muslim owned property. Other residents heard the sounds of gunfire and small explosions coming from the depths of the expansive property.

In reality, the Muslims of the world do not hate Americans, a fact which the enemies of Muslims and Christians dislike. Therefore, they create situations in which Muslims are presented as terrorists or enemies of the American people, the sinister plan of Israel in their first attempt at the World Trade Center bombing in 1991, an act later determined to be an inside job carried out by an Egyptian on the FBI payroll, and other agencies.

Homeland Security Secretary Janet Napolitano said Sunday that the thwarting of the attempt to blow up an Amsterdam-Detroit airline flight Christmas Day demonstrated that "the system worked."

No Janet. The terrorist boarded a plane with an improvised explosive device that went undetected. The only reason airplane debris and bodies didn't rain down upon Detroit is that the detonator failed to function correctly.

And Mutallab's own father reported him to US and British authorities, who apparently took no effective action. 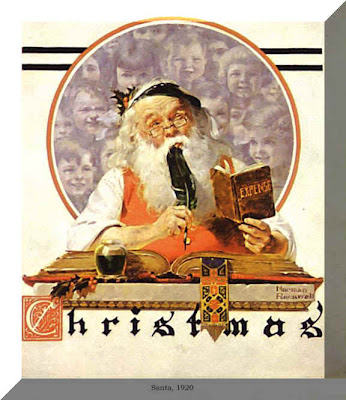 Democratic Rep. Parker Griffith announced Tuesday that he's switching parties – saying he can no longer align himself “with a party that continues to pursue legislation that is bad for our country, hurts our economy and drives us further and further into debt.”

“Unfortunately there are those in the Democratic Leadership that continue to push an agenda focused on massive new spending, tax increases, bailouts and a health care bill that is bad for our healthcare system,” Griffith said in a statement. “I have always considered myself to be an independent voice and I have tried to be that voice in Congress – but after watching this agenda firsthand I now believe that the differences in the two parties could not be more clear and that for me to be true to my core beliefs and values I must align myself with the Republican party and speak out clearly on these issues.

Four other Dems have announced their retirements.

The steamer has to really stink for a far left assmaggot like Ed Schulz to admit State control of the media on his show:

During his syndicated radio show Friday, libtalker and MSNBC host Ed Schultz relayed to listeners how he observed 'Morning Joe' Scarborough and Mika Brzezinski take feedback directly from the White House during their program last week.

This could explain the "tingle" in Chris Matthews' leg when he hears Obama speak. Probably a malfunctioning animatronics implant.

According to Senator Sheldon Whitehouse (D-RI), if you oppose the "health care reform" bill you're ready to get fitted for your Klan hood:

It's amazing that such an ignorant assclown was able to convince a majority of voters in any state to put him in office. An honest Congress would censure the fool for slandering the the majority of the American public, which opposes the so-called "healthcare reform" bill.

Surprising few, Nebraska senator Ben Nelson has offered himself to Harry Reid in exchange for various political considerations. It remains to be seen whether Nelson has managed to outwhore Louisiana's Mary Landrieu, whose state will receive $300,000,000 of your money for her betrayal.

The future of American health care: 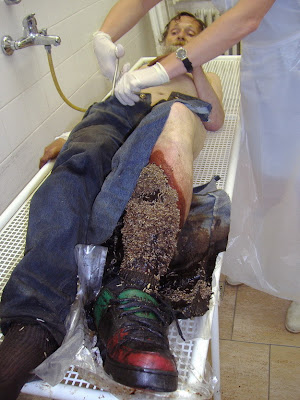 The Almighty serves a dose of reality to the watermelons (green on the outside, red on the inside) discussing the destruction of Western civilization in Copenhagen:

Dec. 17 (Bloomberg) -- World leaders flying into Copenhagen today to discuss a solution to global warming will first face freezing weather as a blizzard dumped 10 centimeters (4 inches) of snow on the Danish capital overnight.

“Temperatures will stay low at least the next three days,” Henning Gisseloe, an official at Denmark’s Meteorological Institute, said today by telephone, forecasting more snow in coming days. “There’s a good chance of a white Christmas.”

Shake It! A GREAT CHRISTMAS GIFT!! BUY YOURS NOW BEFORE WE SELL OUT!!
Come on SHAKE IT! You know you want to! A great visual for you teachers trying to explain the reproductive process. This globe is not only a teaching tool but a conversation piece as well. makes a great gift! Ages 13-99

How dare they call it a "Christmas" gift instead of a "Holiday" gift? Don't little Muslims and Jews need to learn about reproduction too? 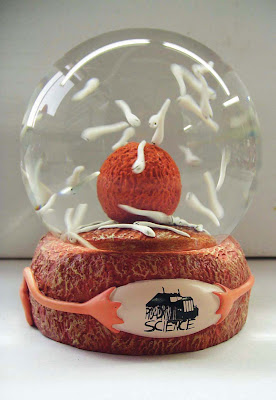 Fifty-six newspapers around the world have joined the Guardian in publishing an editorial devoted to the demands of the cult of Man-made Global Warming.

Climategate is blandly dispatched with a single sentence:

The controversy over emails by British researchers that suggest they tried to suppress inconvenient data has muddied the waters but failed to dent the mass of evidence on which these predictions are based.

If you had any doubt that the whole thing is a political movement based on junk science, buried within the common editorial is the real purpose of the hysteria:

Social justice demands that the industrialised world digs deep into its pockets and pledges cash to help poorer countries adapt to climate change, and clean technologies to enable them to grow economically without growing their emissions.

Copenhagen has absolutely nothing to do with protecting the planet. It's all about using the manufactured "crisis" to fleece the citizens of the United States.

And now we know of fifty-six "newspapers" that, either through naivete or venality, are really only propaganda outlets.

December 7, 1941: forces of the Empire of Japan attack the American naval base at Pearl Harbor, Oahu, Territory of Hawaii. More than two thousand four hundred Americans die in the attack, sixty-eight years ago today.

In a transparent front-page apologia Washington Post writers David A. Fahrenthold and Juliet Eilperin stack the deck with loaded language without ever mentioning the word "whistleblower" [emphasis added]:

It began with an anonymous Internet posting, and a link to a wonky set of e-mails and files. Stolen, apparently, from a research center in Britain...They don't provide proof that human-caused climate change is a lie or a swindle...The stolen electronic files...e-mails were pirated...For a few, however, the stolen files...One of the stolen e-mails...one stolen e-mail...

Notice that the WaPo writers focus on the leaked emails and never ever mention the smoking guns buried in the software code.

What's that smell? Better polish a little harder guys, put your backs into it.

Since the delegates at the Climate Summit have become accustomed to screwing people, Denmark's "sex-worker" industry is coming through with free sex to make them feel right at home:

Copenhagen Mayor Ritt Bjerregaard sent postcards to city hotels warning summit guests not to patronize Danish sex workers during the upcoming conference. Now, the prostitutes have struck back, offering free sex to anyone who produces one of the warnings.

Heartwarming, whores reaching out to whores. 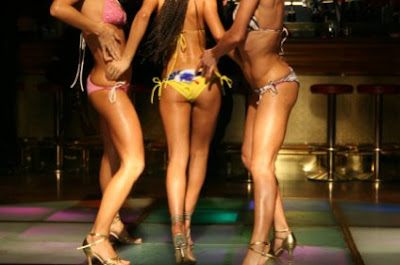 Truth Plus, Now With Lemon

David tries to woo Charles (Johnson, of Little Green Footballs, who has gone over to the dark side) back with a bit of poetry:

If you can bear to hear the truth you’ve spoken
Twisted by knaves to make a trap for fools,
Or watch the things you gave your life to, broken,
And stoop and build ‘em up with worn-out tools;

The same Rudyard Kipling who wrote this:

Take up the White Man's burden--
Send forth the best ye breed--
Go, bind your sons to exile
To serve your captives' need;
To wait, in heavy harness,
On fluttered folk and wild--
Your new-caught sullen peoples,
Half devil and half child.

* All kidding aside, their are hordes of imbeciles who refuse to take Kipling as a talented product of his time and place and insist upon injecting twenty-first century values into critiques of his work.

Howard Dean: How Much Socialism Are We Going to Have?

None for me, thanx, Dr. Yeeeaaaarrrrgh!, I'm trying to cut down on empty ideologies.

I wonder if the good doctor realizes that "ROUGE" is French for "RED?"

Phil Jones, one of the central figures in the Climategate scandal, is temporarily stepping down:

LONDON — Britain's University of East Anglia says the director of its prestigious Climatic Research Unit is stepping down pending an investigation into allegations that he overstated the case for man-made climate change.

The university says Phil Jones will relinquish his position until the completion of an independent review into allegations that he worked to alter the way in which global temperature data was presented.